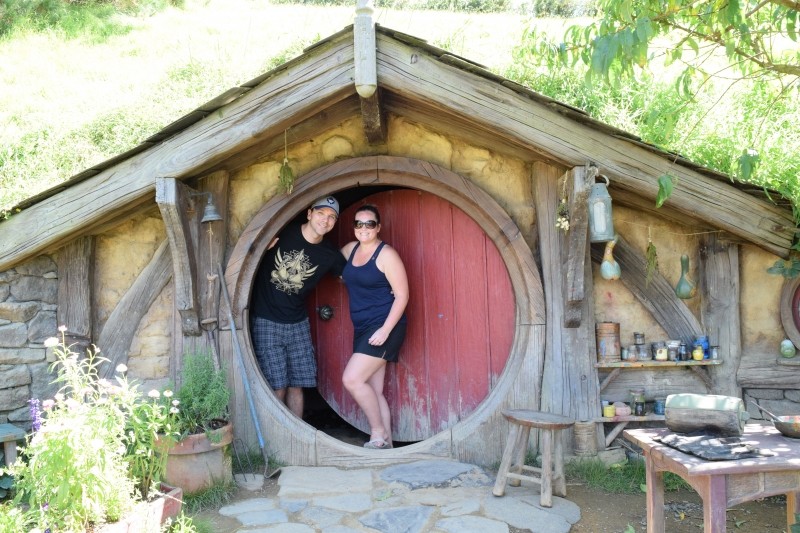 Ever since I first saw “The Fellowship of the Ring” I wished that the worlds Peter Jackson created in the movies were real so that I could go out and live those worlds for myself.  Then I learned that Hobbiton had been built on a farm, it was not just another special effect set, it did exist somewhere! Like all movie sets on location it had been built quickly and temporarily, none of it would last and it would all be removed.

Move forward a few years and Peter Jackson is at it again filming “The Hobbit” films, and they need to film in Hobbiton.  We learned on the tour that when Peter went knocking on the Alexander family farm door to use the property again the owners said “Sure Peter, but this time build it permanently”.  Instead of being built in a few months like the original set, it took two years, and is rated to last over 50 years.

Now it’s our turn to “go on an adventure”!  Tara and I left our beautiful farm stay of Kauri Lodge and drove up to Hobbiton.  We arrived at where the GPS said would be Hobbiton, but all we saw was a ticket centre and some food, we wondered where could it all be?  We got our tickets and were informed a bus would pick us up to take us into Hobbiton.  The entire set was built on private property, and we later learned one of the reasons they liked this spot so much was that when filming there were roads, power lines, or essentially anything from the modern world that could be seen in the background.  On the bus, we all formed our own “fellowship”, and set off for the tour.

My excitement was building, as this was probably the part of the trip I was looking forward to the most.  It was finally our turn for the tour and we loaded the bus.  A short introductory video played as we drove through the sheep covered hills, we could not believe our eyes as the town came into view.  It felt like we had wandered into another world, that at any moment I’d see a door open and a Hobbit would walk out.  Every detail was perfect just like the movies, (one of the reason they are so great).  All Tara and I could do was snap photos and grin like children at each other.  Hobbiton truly is a magically place, and you could tell that special attention had been paid to not cheapen the experience.  As we went along the tour we learned all kinds of little details about the films, which is impressive as Tara and I have watched every single behind the scenes out there!  One of our favourites was when they were filming the scene in which the firework dragon goes off inside the tent at Bilbo’s birthday party.  The actors playing Merry and Pippen were not giving the reaction that Peter Jackson was looking for.  He had the crew rig up some firecrackers to go off in sync with the tent being pulled off of them, but he conveniently forgot to mention this to the actors.  On the film you can hear one of them scream like a little girl, and although he begged it not be used in the film it was just to good not to use!

After we had seen all of Hobbiton it was time for a drink at the famed Green Dragon Inn.  Walking in you would swear you heard Merry and Pippin singing a Hobbit pub song.  Tara and I both opted for the cider, sat down and relaxed as we marvelled at the details inside the inn. And yes, we checked to see if the washrooms were Hobbit sized; they are not, but they were certainly Hobbit themed.  The coolest part of being at the inn was walking back in from the washrooms and having to swing open a round Hobbit door.  It made it all come alive just that much more, and for a moment you think you see Frodo and his friends hanging out.

I think I’m at the point where maybe I should just go with the saying “a picture says a thousand words,” so check out some of our photo’s here and even more in the gallery (coming soon).