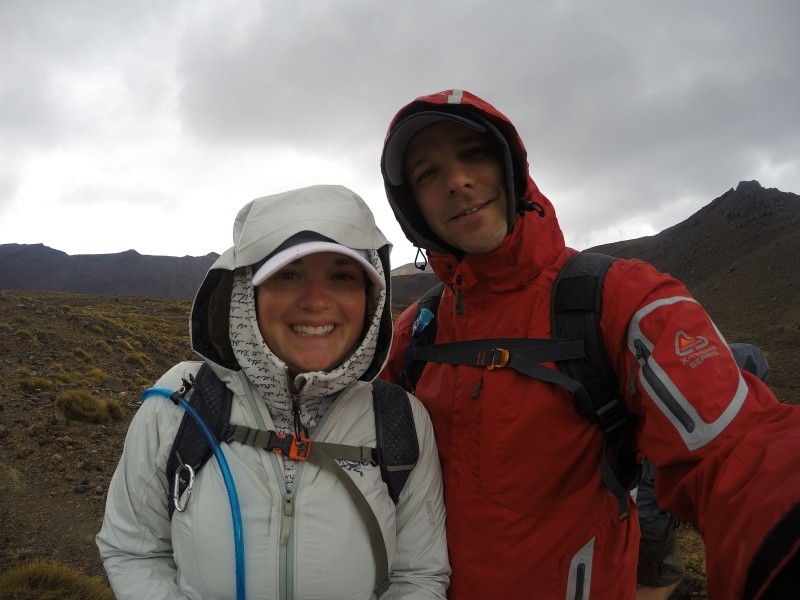 We learned a few days ago that New Zealand trail kilometers, and kilometers at home don’t feel like the same thing.  And when they say “some fitness required” they mean you really should be in good shape, like Hal Johnson and Joan Mcloud shape.  So the anxiety I had the night before our 20km trek had developed into full blown panic by the time our 8:00am shuttle picked us up.

The morning was crisp and clear, but our guide mentioned she was worried about some clouds coming in so we would try and do the first half quickly.  Easy enough right? Our little fellowship of hikers set out, and the first 20 minutes were a gorgeous easy trek through the valley.

You could easily see scenes from the Lord of the Rings every where you looked. But things got tough really quickly.  The trail was meticulously groomed and the views were spectacular, but the ascent included stair case after stair case, and we hadn’t even reached the stretch called the Devils Stair Case yet.

As we climbed across the foot of Mount Ngauruhoe it was our excitement at seeing Mount Doom and the incredible vistas that kept me going.  Let’s just say I had a lot of time to drink in those views as I caught my breath.  After what seemed like a whole day of stair climbing we finally crested what I hoped was the rim of the crater, especially since there was an orange plateau a head of us.  I figured it was the red crater, but our guide informed us that we would know when we were at the red crater.   Apparently we hadn’t even begun to climb the rim of the volcano yet. 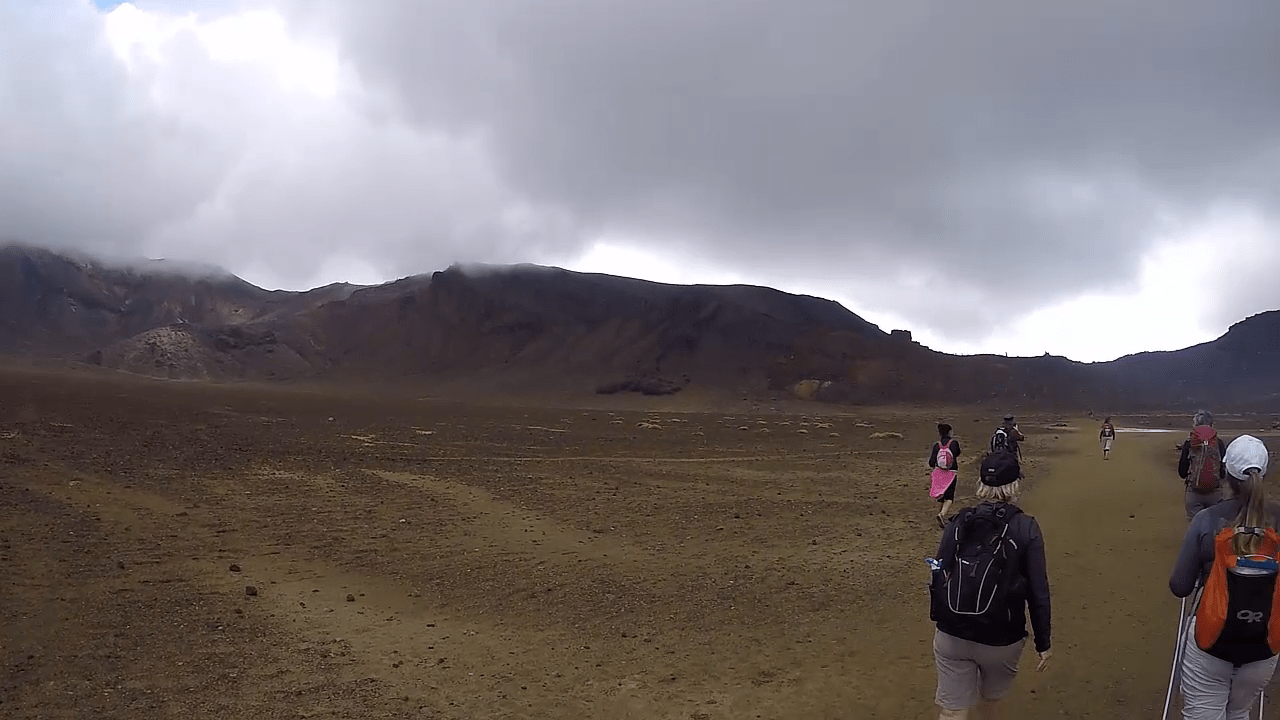 At this point Mt Doom’s summit was hiding in the clouds and I started to question the sanity behind this trek.  The next climb mercifully had no stairs, but instead had tons of scampering about like a mountain goat.  It also had a section involving a chain anchored to the cliff face where you had to use your upper body to haul yourself up the trail.  Upper body strength is not my strong point, actually at this point my lower body wasn’t feeling too great either.  The payoff was huge though.  We were looking down into the valley they used to film Mordor at the foot of Mount Doom.  This was the moment Jose and I had been so excited about, it was amazing. And the red crater was like something you would see on Mars, split by a giant steaming fissure that looked like a gateway right into the core of the earth.  It was unbelievable. 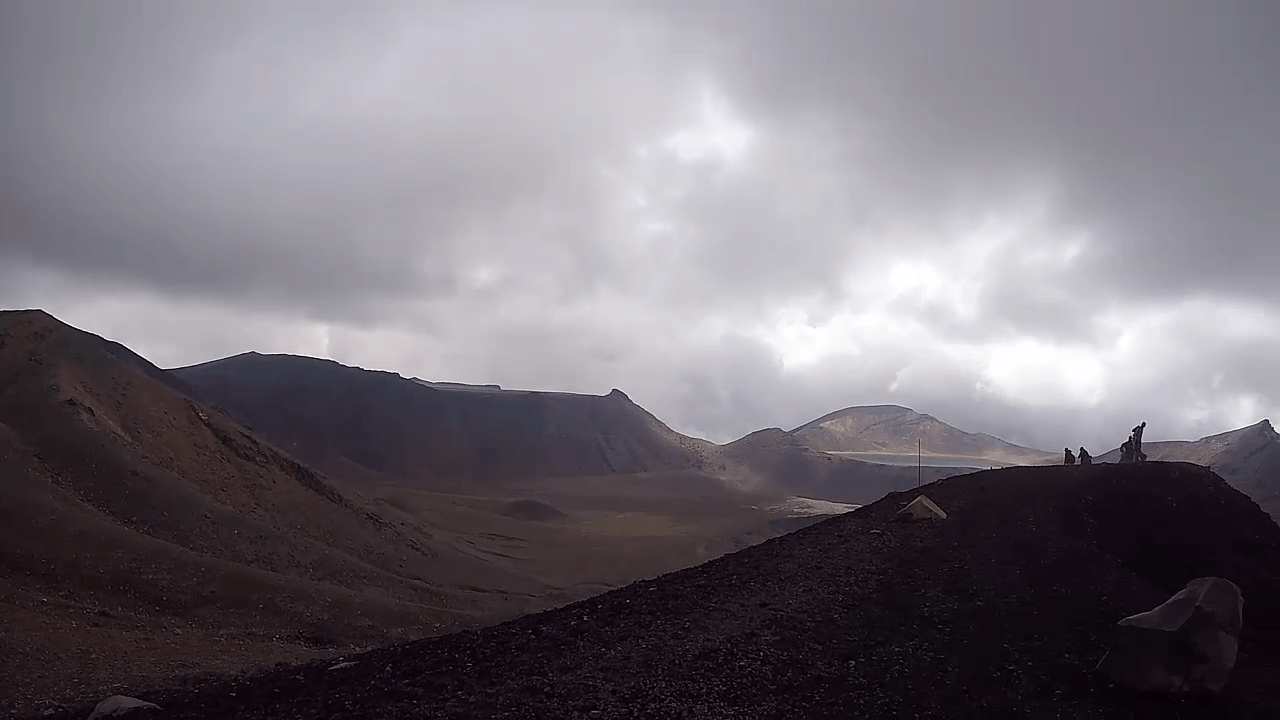 One more brutal climb and we were finally at the ridge of the caldera.  The view of the emerald lakes below was another absolutely breath taking moment (assuming I had breath left, which I barely did), and where we were meant to be having our lunch after our 10 km ascent.  There was a pretty steep section of scree that we had to get down to see the lakes.  It felt pretty scary but once you figured out the technique of the controlled slide it was only partially terrifying.

That is until it started raining about half way to the bottom.  By the time we made it lakeside it was pouring, and at that altitude it was also freezing.  We crammed our lunches into our faces as fast as we could so that we could get our hands inside our jackets before they froze.  I’m an expert at this eating technique, having honed my skills on the Rideau canal cramming Beaver Tails into my mouth before I got frost bite on my fingers.  Once we got moving again I realized there is a really big downside to climbing inside a crater, you have to ascend the other rim to get out.   I would say without exaggeration, the next two hours were pure misery.  We were soaked through our pants, our hiking boots were sloshing, it was so wet that the water didn’t matter any more.  That part of the journey I’m sure had some beautiful vistas, but I didn’t notice.  All I saw was the creek of rain runoff streaming down the path, that I quickly stopped bothering to avoid.  Once we started descending it got worse, my already rotten, exhausted knees hate down hill, and stairs going down, and the wet and they were letting me know their dissatisfaction with every step. 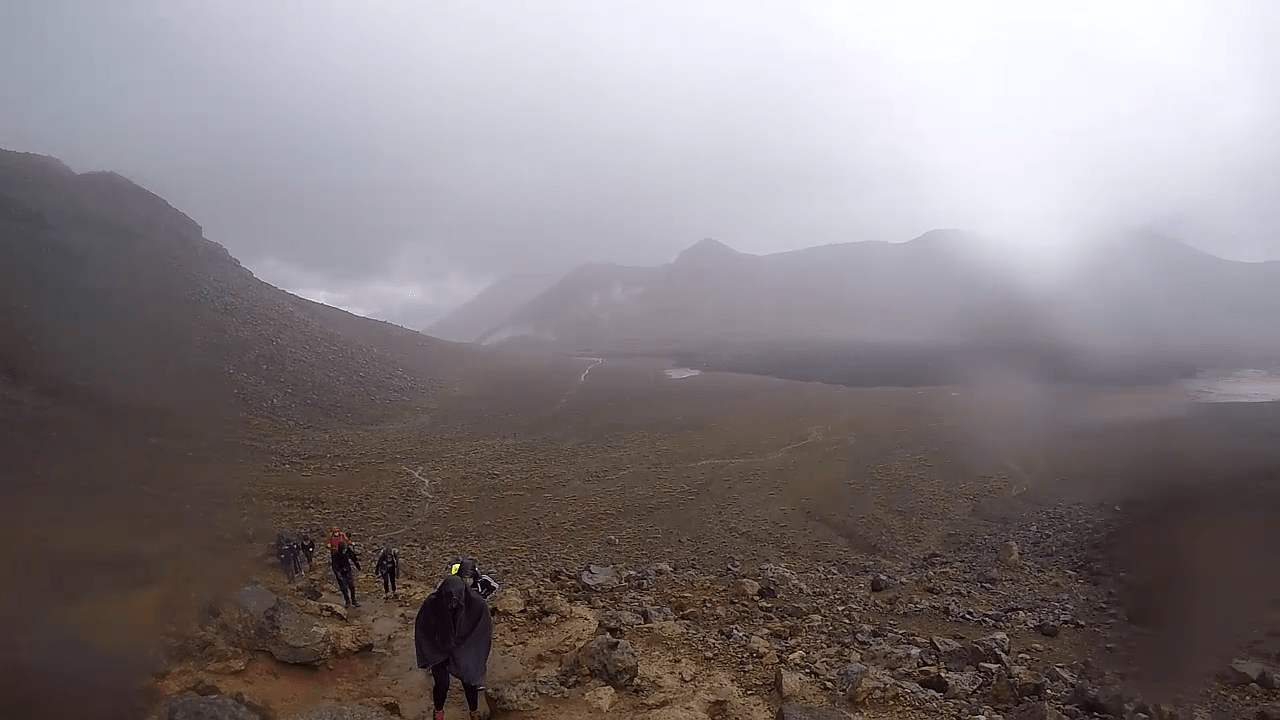 I finally saw a cabin that I hoped and prayed was the end of the trail, but I couldn’t ignore the tiny trail of ant people I saw leaving it.  We took a moments refuge in the little shelter, and took a peak at the room that was ripped apart from the last eruption in the 90’s.  At that point I kind of wished it would erupt right then and save me from the rest of the trip back.  I was hoping we only had 2 or 3 kilometers left, but it turned out we had 6 to go.  I like to think I can push through a lot, but this one was a big ask. 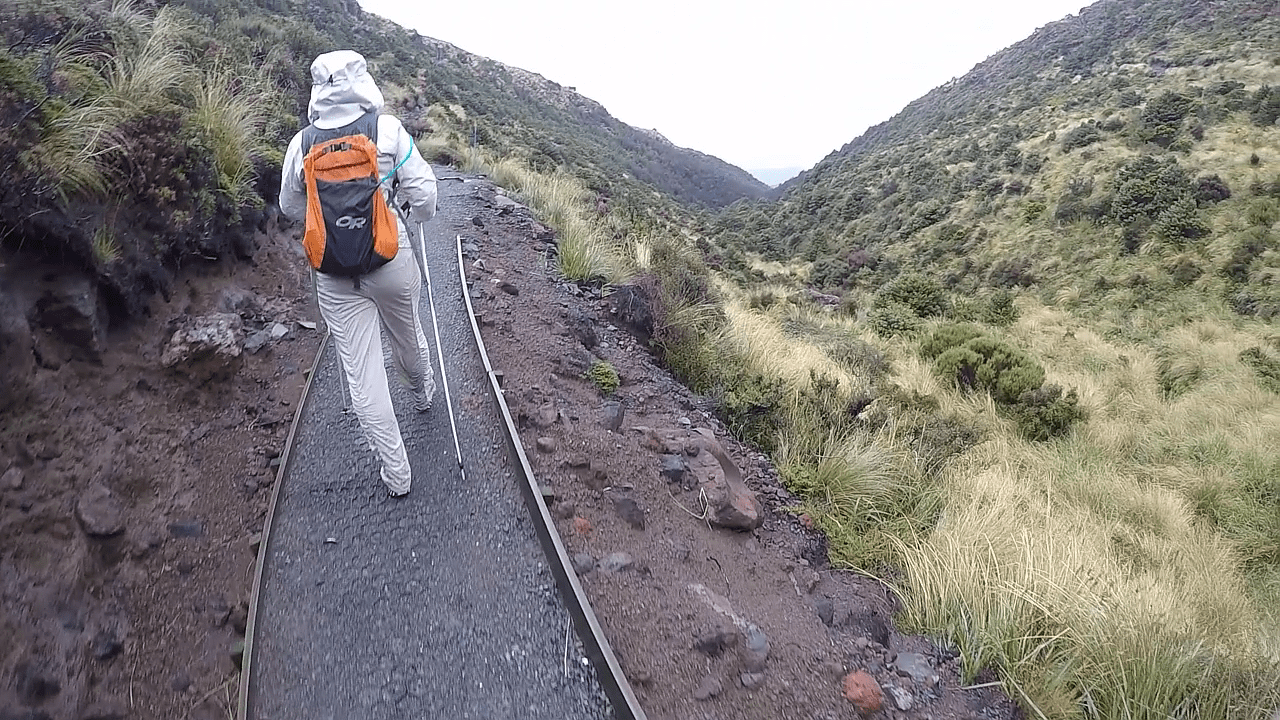 (I’m the one dressed like a storm trooper from Hoth, according to Jose)

The rain stopped long enough for us to enjoy some waterfalls and glistening alpine fields.  As the kilometers crawled by and the trail went into the forest cutting off the views that were keeping me going I started to rely more on Jose and I chanting “just keep swimming, just keep swimming.”  The chant was his alternative to carrying me Samwise Gamgee style, despite my repeated requests. By the time we reached the blessed parking lot we were soaked, filthy, and exhausted.  We had a celebratory drink and contemplated what we had achieved.  I think if you were an experienced climber, and in fantastic shape with good weather then this would be the trek of a lifetime.  As for me, I think I would have preferred an exit by giant eagle myself, but we can’t all be as lucky as Frodo and Sam.